A trip to Elko…

I’m back to doing my weekly blogs — hopefully. I tend to do these personal/photo blogs on Sunday evenings and sometimes I don’t get them done, but I will try. I’m going to start blogging more about business during the work week as well. I hope you find those interesting — there are a lot of exciting changes taking place at Web-Sites-For-Less.com.

A couple of weeks ago my brother and I met in the Salt Lake City airport to catch a “puddle-jumper” prop plane to Elko, Nevada. It was our “winter getaway”. Huh, you say? Elko, Nevada, you’re kidding!

It was a trip we had planned for nearly a year — we’d had our plane tickets and room reservations for over 6 months. Good thing or we would have been sleeping on park benches as there were no rooms left in the inns. Seriously!

So what brings so many people to Elko, Nevada in the dead of winter? The 27th Annual National Cowboy Poetry Gathering, that’s what. Hundreds and hundreds of the real thing (ranchers) and wannabes alike converge on this small mining town for a long weekend of music, storytelling, poetry reciting and amazing Basque food.

Listen to a sample by longtime cowboy poet Waddie Mitchell or some saloon piano music by Dave Bourne. Or, a very beautiful, powerful song called “A Long and Lonesome Ride to Dalhart” by Michael Martin Murphey.

On the noisy, vibrating flight over from Salt Lake City there was a lady from California who struck up a conversation with me from across the aisle. She said she learned about “The Gathering” after the second year and that this would be her 25th straight! It was my first.

I can tell you that I hope never miss another one. Unbelievable. 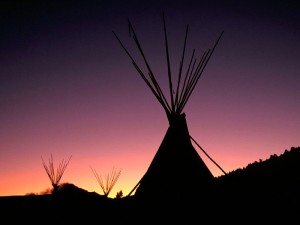 The photo seems fitting to the cowboy theme of this blog. It was taken after sunset in a high mountain meadow in southwest Montana. Summer rendezvous date back to the days of the mountain men, like Jim Bridger and John Colter (of the Lewis and Clark Expedition), when trappers, indians and other Westerners would meet the traders from back East in these mountain valleys all over the Rockies.

My late friend, Jim Stoltz, wrote and sang about it this way:
Old man Bridger’s got his tales to tell,
About the West and the golden days,
About the tribes and the trappers and the paths they made,
In the Rocky Mountain trade.
He’ll smile a lot about the clear Green River and the times in Jackson Hole,
He’ll tell you ’bout a pretty little Flathead lady that he loved so long ago…

The trick to taking photos like this one is the metering. Zoom in on the average part of the sky and meter the shot there. If you let the meter read the dark foreground the shot will be overexposed and turn out way too light, losing the silhouette effect.